20% of all the world’s mammals, approximately 1400 species, are bats. But surely their existence is under rated, perhaps in large part to their nocturnal nature, and our own preference for daylight hours.

Australians have a love/hate relationship with flying foxes (also called fruit bats). There’s no denying that trying to live with a colony of several thousands near your house with the noise, smell and mess would be horrendous. But they are an essential part of our ecosystem in their role as top pollinators.

I have seen three species of flying foxes in the wild. Unlike insectivorous bats, they don’t have to rely on sonar to catch food, so they don’t have the large ears and leaf shaped noses to send and receive squeaks. Hence there faces are quite fox-like and I think very attractive.

The Grey-headed Flying Fox (Pteropus poliocephalus) roosts in large colonies, including at the Bellengen River in the town of Bellengen. We saw hundreds on the afternoon we were there, and the more we looked the more we saw. The occasional one would change position and fly about before resettling on a branch. 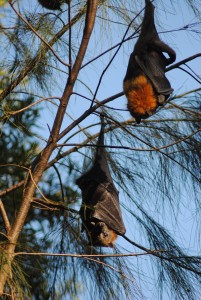 The Black Flying Fox (P. alecto) is smaller and generally black all over. I saw them at the Brisbane City Botanic Gardens on Kangaroo Point near the Alice Street entrance, and even more at Kearneys Spring Park at Toowoomba where I went to look for Brown Hares (but that’s another story)

The Little Red Flying Fox (P. scapulatus) is a bit more nomadic, following the food supplies, but I was overjoyed that a small number came to my yard in Armidale in December to eat mulberries off our tree. Brushy the possum had to share the feast but they seemed to get along. 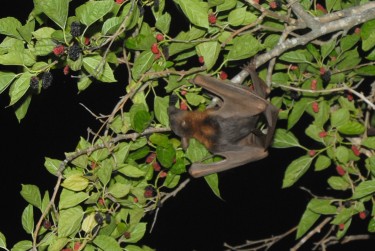